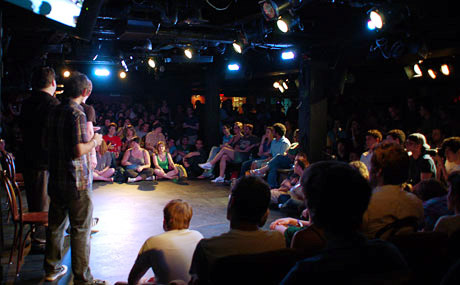 “My love life is terrible. The last time I was inside a woman was when I visited the Statue of Liberty.”

“I love giving tourists directions. That’s one of my favorite things to do. I’ll sometimes offer directions when people don’t even ask me. I saw these two women who were clearly lost, and I walk up and go, ‘You need help finding something?’ She looks up and goes, ‘Oh no, we prefer to find it ourselves.’ Isn’t that a weird preference? Yeah, my friend and I have always been passionate about you not helping us. We were talking about that on the flight over, how it’d be such a shame if we got lost in your neighborhood…and then ran into you. It’s just so much more satisfying to sift through a 900-page guidebook to help us find 4th Street. When we’re standing on 4th Street.”

Comedy Central Presents
Get More: Jokes,Jokes of the Day,Funny Jokes

“I’ve been living in the city for 15 years; I have no idea where the train is going. The worst is when the train goes express on a whim. Like mid-ride, they decide, Let’s not stop. Why are we stoppin’? Let’s just go. And let’s not tell them either. Or let’s tell them as the doors are closing. [Closing doors sound] ‘Next stop 205th Street.’ The worst thing is you can’t really react, you know? I can’t go, 'Oh my god, somebody help me! I don’t belong on this train! That’s not my area up there!’ You can’t do that. When you get there, you gotta get out like, Alright, I’m home. Yeah. Good to be back on 6 trillionth street.”

“Derek Jeter, to play in the All-Star Game, he got a million votes. That’s a lot of votes. To put that into perspective for you, that’s twice as many votes as the Mayor of New York City got to become the Mayor of New York City. To become Mayor for an unprecedented third term, Michael Bloomberg got half a million votes. There are over 8 million people in this city. There’s a saying that there are 8 million stories in this city. Seven and a half million of those stories are just excuses why people didn’t vote for mayor. They all go like this: Once upon a time, I forgot. The end.”

“I was on the train. I made eye contact with this woman. The train stopped, and she got off and moved to another car. Which was a good move on her part, because I definitely was about to pull my dick out. So great intuition, random lady on the train! Good call. But’s it’s my move now; I got legs too. What’s up? Not gonna foil my creepy plans that easily! I’m dedicated to this.”

“In New York, you are constantly faced with this very urgent, quick decision that you have to make about every 20 minutes. And it doesn’t matter where you are—indoors, outdoors, fuckin’ in a park, in a museum, in a restaurant…. About every 20 minutes, immediately, you have to go [gasp], Oh my god. Do I look at the most beautiful woman in the world or the craziest guy in the world? Look at her; she’s fucking beautiful! But look at him, he’s wearing orange footie pajamas and he’s got tinfoil on his head and he’s playing a Casio!”

Comedy Central Presents
Get More: Jokes,Jokes of the Day,Funny Jokes

“I’ve lived in New York City way too long. I realized this ’cause I was on the subway the other day and I heard a meow moewwww and I’m like, Oh great, here comes some frickin’ guy pretending he’s a cat. And I turned around and it was a cat. In a bag. That’s what New York City’s done to me. I’m like, Cat noise? Can’t be the animal that makes that noise. It’s gotta be some weird cat guy. Like I was gonna turn around and there was going to be some guy with like cat ears and a unitard and felt whiskers.”